When I created this blog to document trips through irregular and overlooked landscapes I never thought that one month later I would be here writing about Amsterdam City Centre, one of the most visited and photographed locations in Europe.

One week after the Coronavirus pandemic forced the closure of public spaces within the city, the normally overcrowded Saturday morning streets and tourist hot-spots are almost deserted. For the first time in its 800 year history, the city centre has become almost irrelevant now that it offers nothing for people to consume. Meanwhile the Vondel Park is a hive of activity for those seeking a brief respite from the necessary indoor social isolation.

Today I explored the sights of abandoned Amsterdam, taking in the traditionally busy locations via brisk 5km cross-sectional city walk from Centraal Station to Vondel Park. 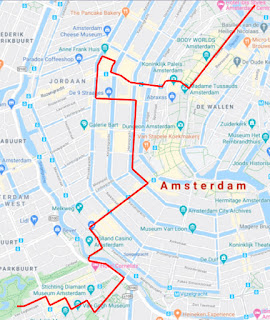 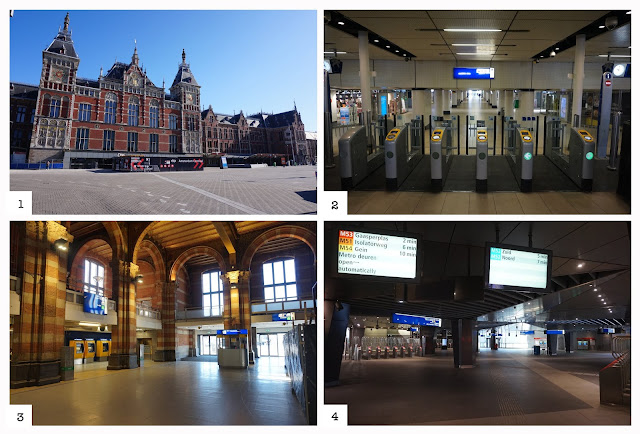 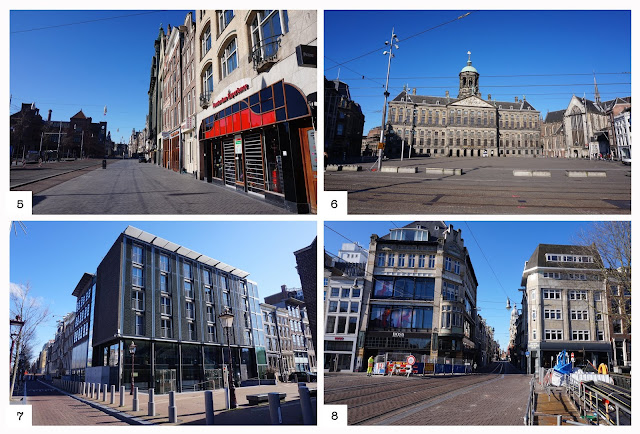 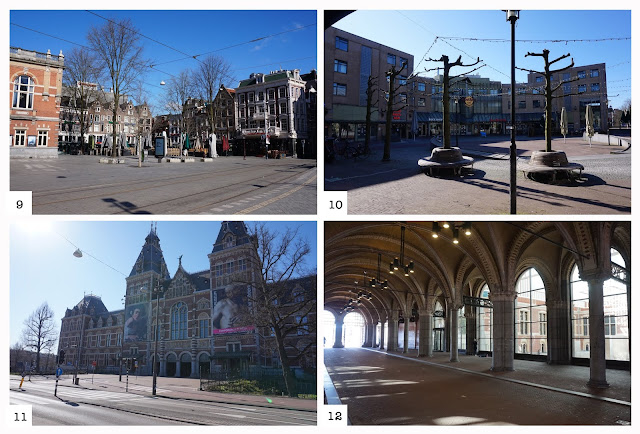 9. Leidseplein, a popular destination for those looking for bars, restaurants and nightlife.
10. Max Euweplein
11. The Rijkesmuseum. The most visited museum in The Netherlands. In 2019 it welcomed 2.7 million visitors through its doors (average 7,400 per day).
12. Museumstraat. The public passage through the centre of the Rijkesmuseum with one lone violinist busking. 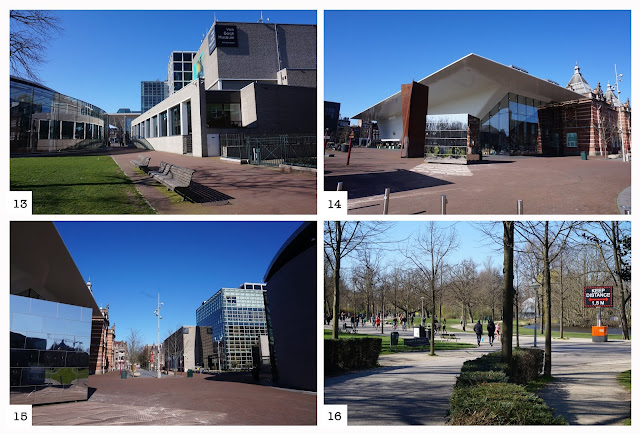 at 21 March No comments:

I was recently hired to take two visitors from the United States on a tour of Amsterdam, taking in some of the city centre sights, along with some of its history and culture.

Unfortunately, two days before the planned meet-up, the Covid19 pandemic threatened air travel back to the States, so my clients were forced to leave Europe on the first available flight.

Disappointed by cutting their European vacation short, I was asked by the travelers if I could still conduct the tour on my own and send them documentation of the things they would have seen.

Here is the resulting photographic record of a circular city hike around Amsterdam Centruum at the beginning of the 2020 Coronavirus outbreak. 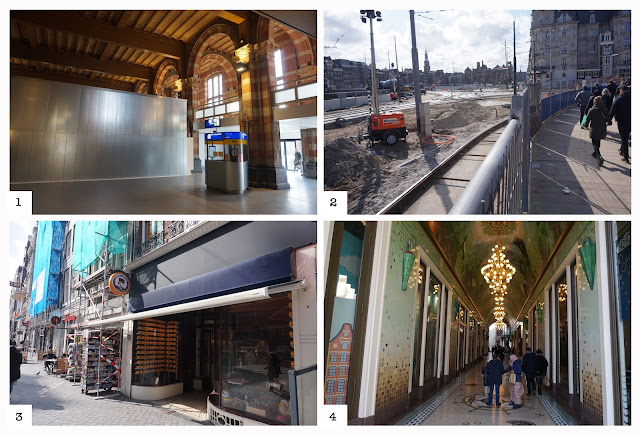 1. The proposed meeting place, an unusually quiet exit out of Centraal Station.
2. The never ending construction work at Stationplein
3. Head down the Damrak towards Dam Square, no stopping for the free cheese samples today.
4. Turn through the Beurs Passage onto the Kalverstraat. 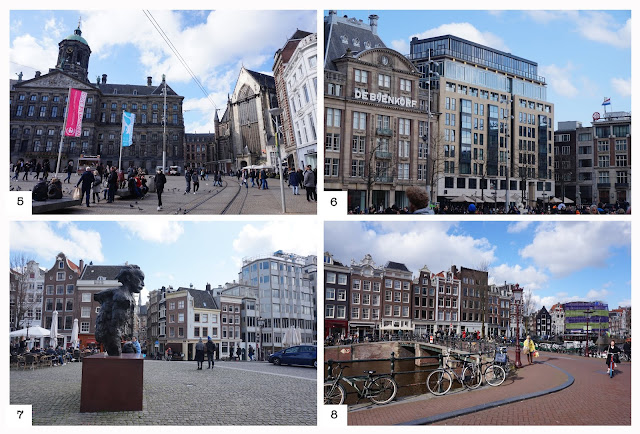 5. Dam Square, the rarely used Royal Palace, 15th century Nieuwe Kerk and Magna Plaza.
6. Amsterdam's most expensive apartment (at time of writing). Three floors overlooking the Dam, bought by Justin Bieber for €24.5 million, yet resold before he ever moved in.
7. Torensluis, Statue of Multatuli. The bridge was once an entrance to the medieval city and the location of a defensive tower. Multatuli , a famed Dutch writer whose work help change 19th century public opinion over colonialism.
8. The Jordaan. An area which once contained gardens and orchards outside the city walls before 17th century urban expansion engulfed it. Today many streets and canals are named after flowers and plants. There is still much debate between historians whether or not the name of the area is connected to the French word jardin (garden). It is possible to roughly age canal houses by the shape and design of their gables. 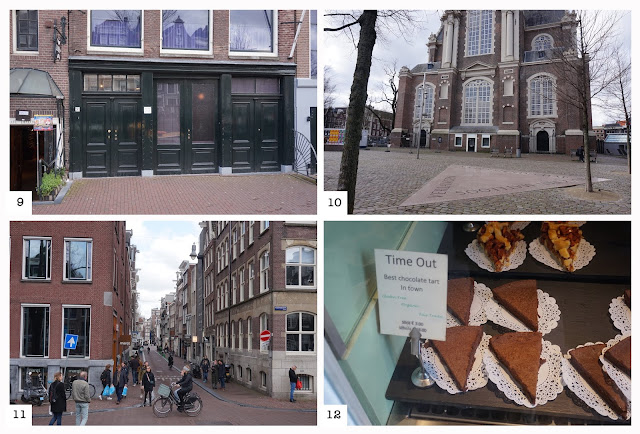 9. Anne Frank House. Closed today due to concerns over the Coronavirus.
10. Westerkerk and Homomonument. At the time of its completion in 1631 the Church was the largest purpose built Protestant place of worship in the world (at the time all other large protestant churches were repurposed Catholic churches). At the base of the Church the pink granite triangles of the Homomonument, the worlds first monument to persecuted LBGTQ people. The monument was built in 1987.
11. The Nine Lanes. Normally a popular shopping destination. Quiet for a Saturday.
12. Chocolate Tart. And possibly the city's best. 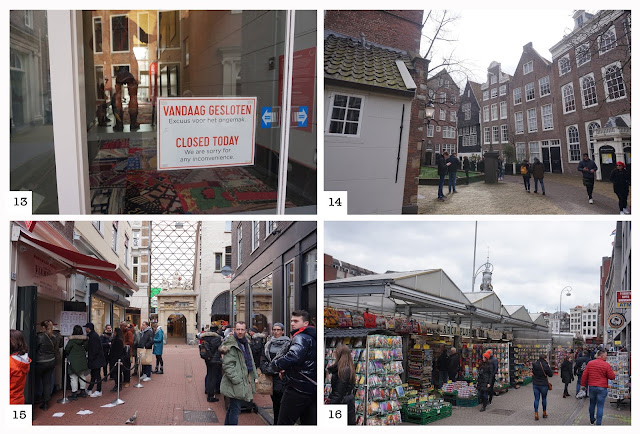 13. The public access passage through the Amsterdam Museum is closed today. Through the locked doors a carpet can be seen on the floor which is made from 180 patterns, each pattern representing one of the 180 nationalities who live in the city.
14. The Begijnhof. An easy to miss secluded enclosure containing houses of a former religious order. There is a story why there are two chapels here within a stones throw from each other. Amsterdam's oldest house (built in 1425) sits at the far end. It is one of only two wooden buildings left in Amsterdam.
15. The entrance to the former Rasp House, a one-time house of correction for petty criminals. Now a generic shopping mall. On the left an establishment selling French fries which has the reputation of being the best in the city.
16. The Flower Market... A place where expectations far exceed reality. But it's a good short cut and would normally be a place to stop for more free cheese samples. 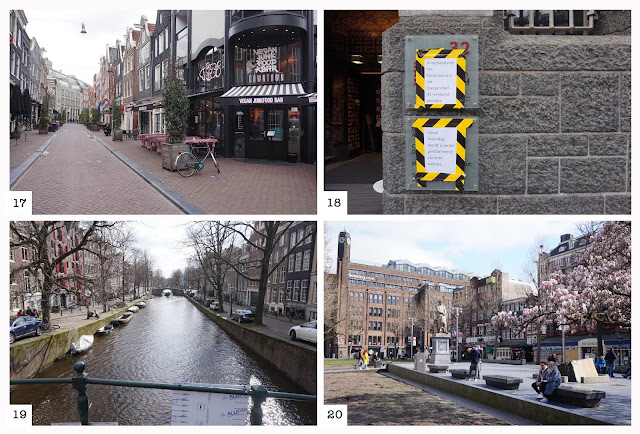 17. Reguliersdwarsstraat. Popular nightspot if you are into that sort of stuff.
18. The opulent basement of the City Archive. Originally built as a secure safety deposit bank vault and only accessible to wealthy customers. Normally free to enter, but closed today due to health precautions.
19. The Bridge of 15 Bridges. If one had stilts or were on the water level it is possible to look around the canal junction and count 15 bridges. Photogenic area.
20. Rembrandtplein. Most expensive beers in Amsterdam. The bronze statues representing figures from Rambrandt's painting The Nightwatch were recently permanently removed due to a funding dispute. Its was reported that maintaining the statues cost €30,000 per year. 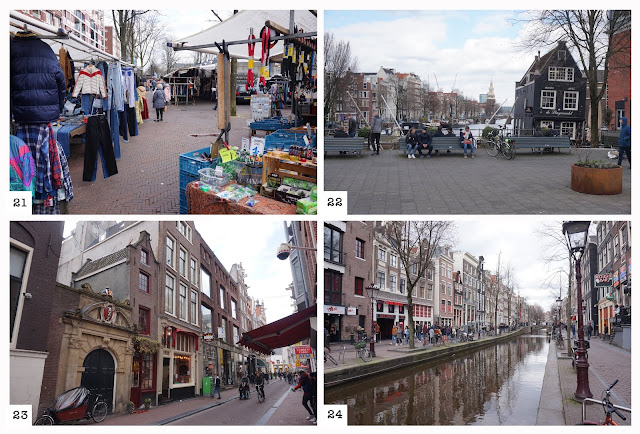 21. Waterlooplein flea market and area of tragic Dutch-Jewish history.
22. Drink stop in water-side leaning bar? okay, if you insist.
23. Amsterdam's narrowest house.
24. The Red Light District. And the only museum which I've seen open today: The Sex Museum (it's actually a tourist trap in the guise of a museum). 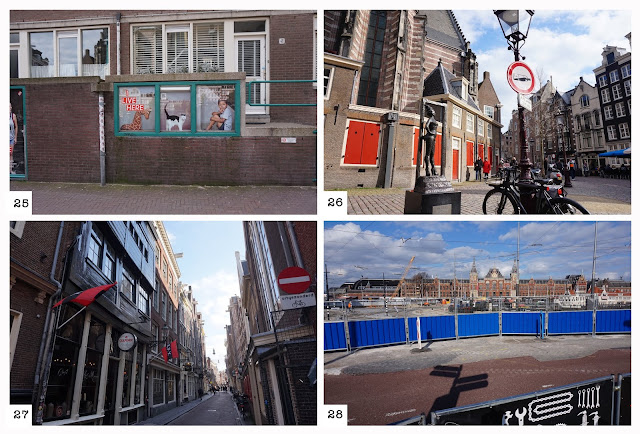 25. In the heart of the Red Light District, a reminder that people live here (it's not a theme park).
26. The 14th century Oude Kerk and a monument dedicated to workers of the prostitution trade.
27. The Zeedijk. One of the first inhabited places back when the area was only windswept marsh. And the city's other remaining wooden house.
28. Return to Central Station. End point! 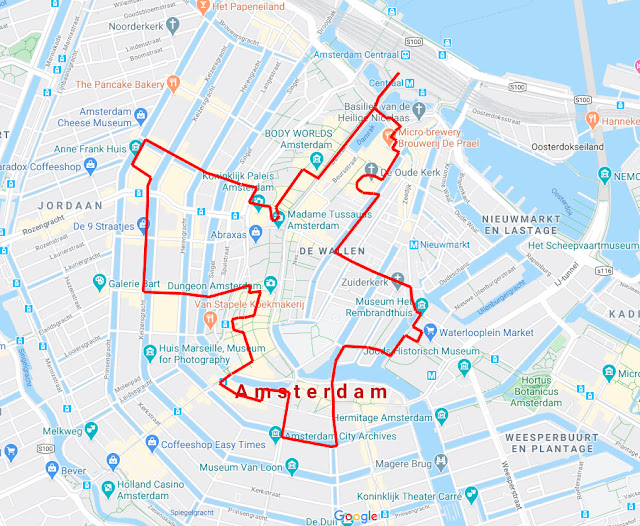 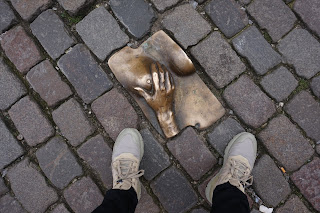 at 15 March No comments:

Email ThisBlogThis!Share to TwitterShare to FacebookShare to Pinterest
Newer Posts Older Posts Home
Subscribe to: Posts (Atom)
This blog charts some of the journeys, hikes and field trips which I undertook as research for studio work. The end results of some of my wanderings can be seen here: Website or here: Instagram